As explain in my CouchDB implementation notes, the current replication mechanism doesn't provide consistency guarantees. This means if the client connects to different replicas at different time, she may see weird results, including ...
To prevent above situations from happening, here describe a possible extension of CouchDB to provides a "causal consistency guarantee" based on Vector Clock Gossiping technique. The target environment is a cluster of machines.

Here is a few definitions ... 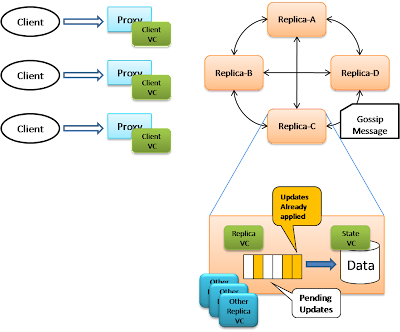 The client talks to the same proxy, which maintains the Client's Vector clock. This vector clock is important to filter out inconsistent data when the proxy talking to the replicas which the proxy can choose randomly.

It is important that Replica exchange the request log among themselves so eventually everyone will have a complete picture for all the update request regardless of where that happens.

Periodically, each replica picks some other replica to send its update log. The strategy to pick who to communicate can be based on a random selection, or based on topology (only talk to neighbors), or based on degree of outdateness (the one with longest time we haven't talked). Once the target replica is selected, a complete update log together with its current replicaVC will be sent to the target replica.

On the other hand, when a replica receive a gossip message from another replica...

Your well planned designs are exciting. What program do you use for your diagrams? And do you get paid to create these solutions?

I use just powerpoint for my diagram.
My purpose of blogging is to write down my thoughts before I forget. And also can meet people with like minds. I don't get paid from doing this.