You can think of planning as a graph search problem where each node in the graph represents a possible "state" of the reality. A directed edge from nodeA to nodeB representing an "action" is available to transition stateA to stateB.

A "domain" defined the structure of the problem.
A "state" is composed of a set of relation instances,  It can either be a "reality state" or a "required state".

A reality state contains tuples of +ve atoms.  e.g. [(personX in locationA), (personX is male)].  Notice that -ve atoms will not exist in reality state.  e.g. If personX is NOT in locationB, such tuple will just not show up in the state.

A required state contains both +ve and -ve atoms.  e.g. [(personX in locationA), NOT(personX is male)]  The required state is used to check against the reality state.  The required state is reached if all of the following is true.
Notice that there can be huge (or even infinite) number of nodes and edges in the graph if we are to expand the whole graph (with all possible states and possible actions).  Normally we will expressed only a subset of nodes and edges in an analytical way.  Instead of enumerating all possible states, we describe the state as a set of relations that we care, in particular we describe the initial state of the environment with all the things we observed and the goal state as what we want to reach.  Similarity, we are not enumerate every possible edges, instead we describe actions with variables such that it describe rules that can transition multiple situations of states.


An "action" causes transition from one state to the other.  It is defined as action(variable1, variable2 ...) and contains the following components.
Notice that since actions contains variables but the reality state does not, therefore before an action can be execution, we need to bind the variables in the pre-conditions to a specific value such that it will match the current reality state.  This binding will propagate to the variable in the effects of the actions and new atoms will be insert / removed from the reality state.

This can be think of a Search problem.  Given an initial state and a goal state, our objective is to search for a sequence of actions such that the goal state is reached. 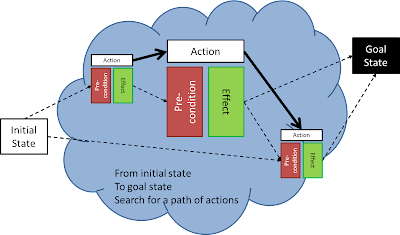 We can perform the search from the initial state, expand all the possible states that can be reached by taking some actions, and check during this process whether the goal state has been reached.  If so, terminate the process and return the path.

Forward planning build the plan from the initial state.  It works as follows ...

Backward planning build the plan from the goal state.  It works as follows ...

In above algorithms, to pick the next candidate from the exploration queue.  We can employ many strategies.
Notice that what is "best" is very subjective and is also domain specific. A very popular approach is using the A* search whose value function = g(thisState) + h(thisState).

Notice that g(thisState) is the accumulative cost to move from initial state to "thisState", while h(thisState) is a domain-specific function that estimate the cost from "thisState" to the goal state.  It can be proved that in order for A* search to return an optimal solution (ie: the least cost path), the chosen h(state) function must not over-estimate (ie: need to underestimate) the actual cost to move from "thisState" to the goal state.