In my previous post, I introduce Map/Reduce model as a powerful model for parallelism. However, although Map/Reduce is simple, powerful and provide a good opportunity to parallelize algorithm, it is based on a rigid procedural structure that require injection of custom user code and therefore it not easy to understand the big picture from a high level. You need to drill into the implementation code of the map and reduce function in order to figure out what is going on.

It will be desirable to have a higher level declarative language that describe the parallel data processing model. This is similar to the idea of SQL query where the user specify the "what" and leave the "how" to the underlying processing engine. In this post, we will explore the possibility of such a declarative language. We will start from the Map/Reduce model and see how it can be generalized into a "Parallel data processing model". 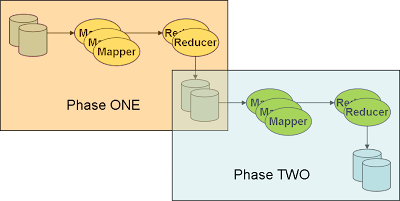 Looking at the abstract Map/Reduce model, there are some similarities with the SQL query model. We can express the above Map/Reduce model using a SQL-like query language.

Here is the corresponding Map and Reduce function

Query with Grouping
Here is the coresponding Map and Reduce function

Query with Join
Here is the corresponding Map and Reduce function

As you can see, transforming a SQL query to Map/Reduce function is pretty straightforward.

We put the following logic inside the map() function

On the other hand, we put the following logic inside the reduce() function
As we've seen the potential opportunity to use a "SQL-like" declarative language to express the parallel data processing and use a Map/Reduce model to execute it, the open source Hadoop community is working on a project call Pig to develop such a language.

PIG is similar to SQL in the following way.

However, there are a number of important difference between PIG (in its current form) and the SQL language.
For more details, please refer to PIG's project site.
Posted by Ricky Ho at 11:15 AM No comments: