In my previous post about Google's Pregel model, a general pattern of parallel graph processing can be expressed as multiple iterations of processing until a termination condition is reached. Within each iteration, same processing happens at a set of nodes (ie: context nodes).

Each context node perform a sequence of steps independently (hence achieving parallelism)
This processing pattern can be implemented using Map/Reduce model, using a MR job for each iteration. The sequence is a little different from above. Typically a mapper will perform (2) and (3) where it emits the message using its neighbor's node id as key. Reducer will be responsible to perform (1).

However, due to the functional programming nature of Map() and Reduce(), M/R does not automatically retain "state" between jobs. To retain the graph across iterations, the mapper need to explicitly pass along the corresponding portion of the graph to the reducer, in additional to the messages itself. Similarly, the reducer need to handle a different type of data passed along.


This downside of this approach is a substantial amount of I/O processing and bandwidth is consumed to just passing the graph itself around.

Google's Pregel model provides an alternative message distribution model so that state can be retained at the processing node across iterations.

In a recent research paper, Jimmy Lin and Michael Schatz use a clever partition() algorithm in Map /Reduce which can achieve "stickiness" of graph distribution as well as maintaining a sorted-order of node id on disk.

The whole graph is broken down into multiple files and stored in HDFS. Each file contains multiple records and each record describe a node and its corresponding adjacency list.

In addition, the records are physically sorted within the file by their node id.

There will be as many reducers as the number of above files and so each Reducer task is assigned with one of this file. On the other hand, the partition() function assign all nodes within the file to land on its associated reducer.

Mapper does the same thing before, except the first line in the method is removed as it no longer need to emit the graph.

Reducer will receive all the message emitted from the mapper, which is sorted by the Map/Reduce framework by the key (which happens to be the node id). On the other hand, the reducer can open the corresponding file in HDFS, which also maintain a sorted list of nodes based on their ids. The reducer can just read the HDFS file sequentially on each reduce() call and confident that all preceding nodes in the file has already received their corresponding messages.

Since Pregel model retain worker state (the same worker is responsible for the same set of nodes) across iteration, the graph can be loaded in memory once and reuse across iterations. This will reduce I/O overhead as there is no need to read and write to disk at each iteration. For fault resilience, there will be a periodic check point where every worker write their in-memory state to disk.

Also, Pregel (with its stateful characteristic), only send local computed result (but not the graph structure) over the network, which implies the minimal bandwidth consumption.

Of course, Pregel is very new and relative immature as compared to Map/Reduce.
Posted by Ricky Ho at 5:34 AM 1 comment:

A lot of real life problems can be expressed in terms of entities related to each other and best captured using graphical models. Well defined graph theory can be applied to processing the graph and return interesting results. The general processing patterns can be categorized into the following ...

Although using a Graph to represent a relationship network is not new, the size of network has been dramatically increase in the past decade such that storing the whole graph in one place is impossible. Therefore, the graph need to be broken down into multiple partitions and stored in different places. Traditional graph algorithm that assume the whole graph can be resided in memory becomes invalid. We need to redesign the algorithm such that it can work in a distributed environment. On the other hand, by breaking the graph into different partitions, we can manipulate the graph in parallel to speed up the processing.

The paper “Constructions from Dots and Lines” by Marko A. Rodriguez and Peter Neubauer illustrate the idea very well. Basically, a graph contains nodes and arcs.

A node has a "type" which defines a set of properties (name/value pairs) that the node can be associated with.

An arc defines a directed relationship between nodes, and hence contains the fromNode, toNode as well as a set of properties defined by the "type" of the arc.

Most of the graph processing algorithm can be expressed in terms of a combination of "traversal" and "transformation".

In the case of "traversal", it can be expressed as a path which contains a sequence of segments. Each segment contains a traversal from a node to an arc, followed by a traversal from an arc to a node. In Marko and Peter's model, a Node (Vertex) contains a collection of "inE" and another collection of "outE". On the other hand, an Arc (Edge) contains one "inV", one "outV". So to expressed a "Friend-of-a-friend" relationship over a social network, we can use the following

Loops can also be expressed in the path, to expressed all persons that is reachable from this person, we can use the following

On the implementation side, a traversal can be processed in the following way
Such traversal path can also be used to expressed inference (or derived) relationships, which doesn't have a physical arc stored in the graph model.

The main goal of Graph transformation is to modify the graph. This include modifying the properties of existing nodes and arcs, creating new arcs / nodes and removing existing arcs / nodes. The modification logic is provided by a user-defined function, which will be applied to all active nodes.

Pregel can be thought as a generalized parallel graph transformation framework. In this model, the most basic (atomic) unit is a "node" that contains its properties, outward arcs (and its properties) as well as the node id (just the id) that the outward arc points to. The node also has a logical inbox to receive all messages sent to it. 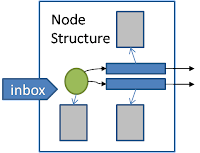 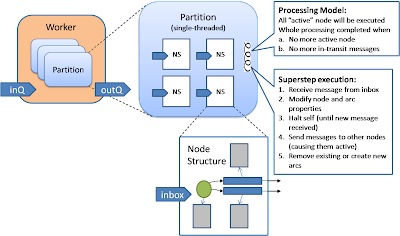 Notice that depends on the graph algorithms, the assignment of nodes to a partition may have an overall performance impact. Pregel provides a default assignment where partition = nodeId % N but user can overwrite this assignment algorithm if they want. In general, it is a good idea to put close-neighbor nodes into the same partition so that message between these nodes doesn't need to flow into the network and hence reduce communication overhead. Of course, this also means traversing the neighboring nodes all happen within the same machine and hinder parallelism. This usually is not a problem when the context nodes are very diverse. In my experience of parallel graph processing, coarse-grain parallelism is preferred over fine-grain parallelism as it reduces communication overhead.

The complete picture of execution can be implemented as follows: 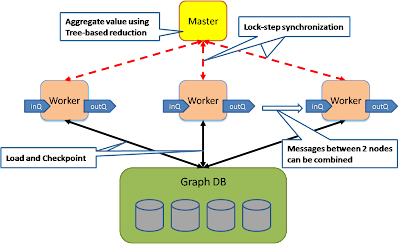 The basic processing unit is a "thread" associated with each partition, running inside a worker. Each worker receive messages from previous "superstep" from its "inQ" and dispatch the message to the corresponding partition that the destination node is residing. After that, a user defined "compute()" function is invoked on each node of the partition. Notice that there is a single thread per partition so nodes within a partition are executed sequentially and the order of execution is undeterministic.

The "master" is playing a central role to coordinate the execute of supersteps in sequence. It signals the beginning of a new superstep to all workers after knowing all of them has completed the previous one. It also pings each worker to know their processing status and periodically issue "checkpoint" command to all workers who will then save its partition to a persistent graph store. Pregel doesn't define or mandate the graph storage model so any persistent mechanism should work well. There is a "load" phase at the beginning where each partition starts empty and read a slice of the graph storage. For each node read from the storage, a "partition()" function will be invoked and load the node in the current partition if the function returns the same node, otherwise the node is queue to another partition who the node is assigned to.

Fault resilience is achieved by having the checkpoint mechanism where each worker is instructed to save its in-memory graph partition to the graph storage periodically (at the beginning of a superstep). If the worker is detected to be dead (not responding to the "ping" message from the master), the master will instruct the surviving workers to take up the partitions of the failed worker. The whole processing will be reverted back to the previous checkpoint and proceed again from there (even the healthy worker need to redo the previous processing). The Pregel paper mention a potential optimization to just re-execute the processing of the failed partitions from the previous checkpoint by replaying the previous received message, of course this requires keeping a log of all received messages between nodes at every super steps since previous checkpoint. This optimization, however, rely on the algorithm to be deterministic (in other words, same input execute at a later time will achieve the same output).

Further optimization is available in Pregel to reduce the network bandwidth usage. Messages destined to the same node can be combined using a user-defined "combine()" function, which is required to be associative and commutative. This is similar to the same combine() method in Google Map/Reduce model.

In addition, each node can also emit an "aggregate value" at the end of "compute()". Worker will invoke an user-defined "aggregate()" function that aggregate all node's aggregate value into a partition level aggregate value and all the way to the master. The final aggregated value will be made available to all nodes in the next superstep. Just aggregate value can be used to calculate summary statistic of each node as well as coordinating the progress of each processing units.

I think the Pregel model is general enough for a large portion of classical graph algorithm. I'll cover how we map these traditional algorithms in Pregel in subsequent postings.