In this post, we'll discuss another important topic of big data processing: real-time stream processing area.  This is an area where Hadoop falls short because of its high latency, and another open source framework Storm is developed to cover the need in real-time processing.  Unfortunately, Hadoop and Storm provides quite different programming model, resulting in high development and maintenance cost.

The core Spark programming paradigm consists of the following steps ...

Notice that the RDD is immutable, therefore the sequence of transformations is deterministic and therefore recovery from intermediate processing failure is simply by tracing back to the parent of the failure node (in the DAG) and redo the processing from there.

Spark Streaming introduce a data structure call DStream which is basically a sequence of RDD where each RDD contains data associated with a time interval.  DStream is created with a frequency parameters which defines the frequency RDD creation into the sequence.

Instead of performing a 1 to 1 transformation of each RDD in the DStream.  Spark streaming enable a sliding window operation by defining a WINDOW which groups consecutive RDDs along the time dimension.  There are 2 parameters that the window is defined ... 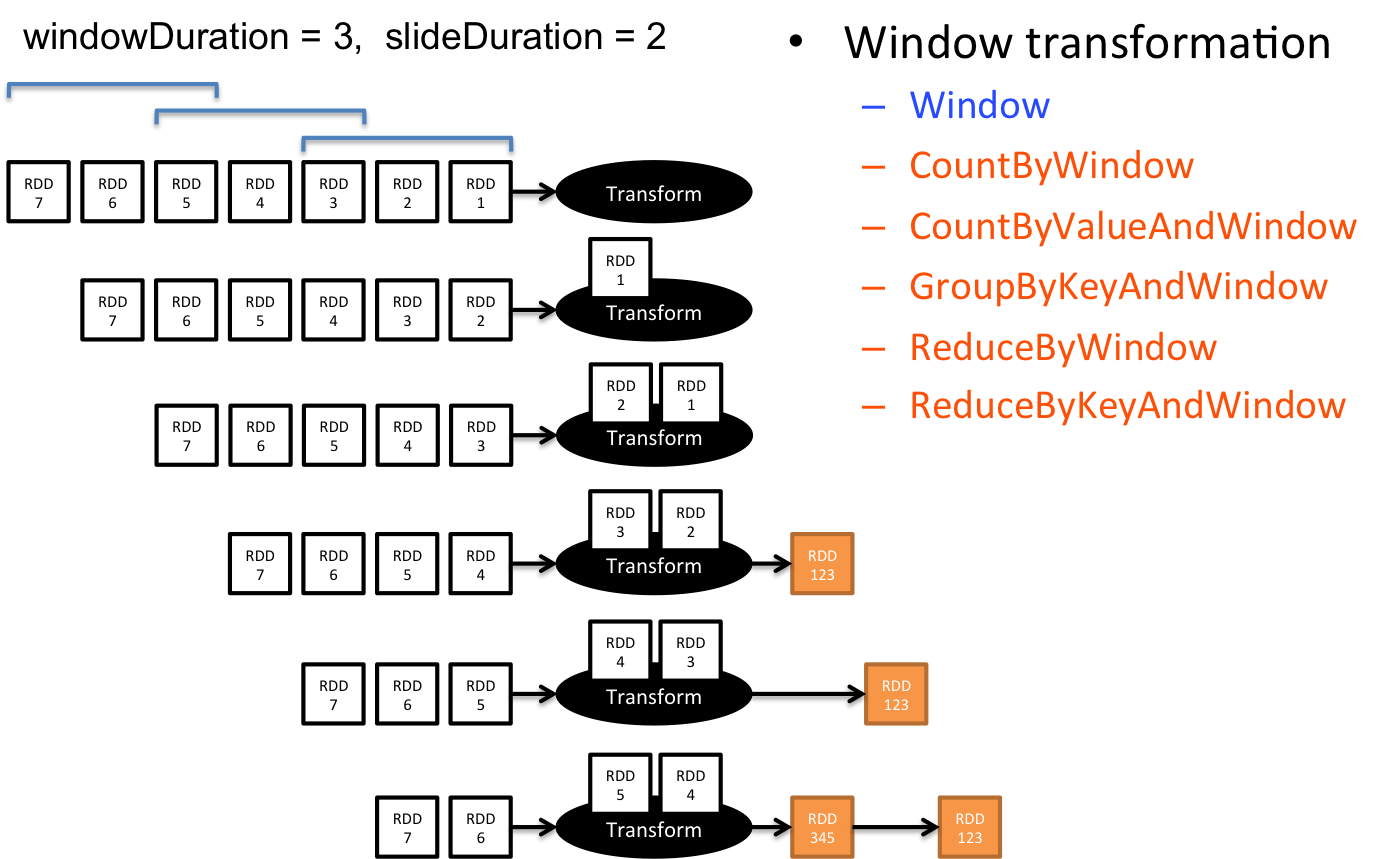 By providing a similar set of transformation operation for both RDD and DStream, Spark enable a unified programming paradigm across both batch and real-time processing, and hence reduce the corresponding development and maintenance cost.
Posted by Ricky Ho at 10:11 PM No comments:

First of all, "data science" itself is a very generic term that means different things to different people.  For the projects I involved, many of them target to solve a very tactical and specific problem.  However, over the last few years more and more enterprises start to realize the strategic value of data.  I observed a growing number of strategic data science projects were started from a very broad scope and took a top-down approach to look at the overall business operation.  Along the way, the enterprise prioritize the most critical areas within their operation cycle and build sophisticated models to guide and automate the decision process.

Usually, my engagement started as a data scientist / consultant, with very little (or even no) domain knowledge.  Being unfamiliar with the domain is nothing to be proud of and often slow down my initial discussion.  Therefore, within a squeezed time period I need to quickly learn enough "basic domain knowledge" to facilitate the discussion smooth.  On the other hand, lacking a per-conceived model enables me (or you can say force me) to look from a fresh-eye view, from which I can trim off unnecessary details from the legacies and only focus on those essential elements that contributes to the core part of the data model.  It is also fun to go through the concept blending process between a data scientist and a domain expert.  I force them to think in my way and they force me to think in their way.  This is by far the most effective way for me to learn any new concepts.

Recently I had a discussion with a company who has a small, but very sophisticated data science team that build pricing model, and demand forecasting for their product line.  I am, by no means an expert in their domain.  But their problem (how to predict demand, and how to set price) is general enough across many industries.  Therefore, I will use this problem as an example to illustration the major steps in the common pattern that I describe above.

Lets say a car manufacturer starts its quarterly planning process.  Here are some key decisions that need to be made by the management.
First of all, we need to identify the ultimate "goal" of these decisions.  Such goal is usually easy to find as it usually in the company's mission statement.

In general, I find it is a good start to look at the problem from an "optimization" angle, from which we define our goal in terms of an objective function as well as a set of constraints.

As an illustrative example, we start from our objective function "Profit_2015" and define the dependency relationship below. Decision variable is highlighted in blue.

Identifying these variable and their potential dependencies typically come from a well-studied theory from University, or domain experts in the industry.  At this stage, we don't need to know the exact formula of the function F/G/H.  We only need to capture the links between the variables.  It is also ok to include a link that shouldn't have exist (ie: there is no relationship between the 2 variables in reality).  However, it is not good if we miss a link (ie: fail to capture a strong, existing dependency).

This round usually involves 4 to 5 half day brainstorming sessions with the domain experts, facilitated by the data scientist/consultant who is familiar with the model building process.  There may be additional investigation, background studies if the subject matter experts doesn't exist.  Starting from scratch, this round can take somewhere between couple weeks to couple months

In this round,  we want to identify the relationship between variable using formula of F(), G(), H().


Well-Known Function
For some relationship that is well-studied, we can use a known mathematical model.


Semi-Known Function
However, some of the relationship is not as straightforward as that.  For those relationship that we don't exactly know the formula, but can make a reasonable assumption on the shape of the formula, we can assume the relationship follows a family of models (e.g. Linear, Quadratic ... etc.), and then figure out the optimal parameters that best fit the historical data.

Lets assume the "demand" is a linear combination of "GDP" and "Phone sold", which seems to be a reasonable assumption.

Then we feed the historical training data to a build a linear regression model and figure out what the fittest value of w0, w1, w2 should be.


Time-Series Function
In some cases, a variable depends only on its own past value but not other variables, here we can train a Time Series model to predict the variable based on its own past values.  Typically, the model is decomposed into 3 components; Noise, Trend and Seasonality.  One popular approach is to use exponential smoothing techniques such as Holt/Winters model.  Another popular approach is to use the ARIMA model which decomposed the value into "Auto-Regression" and "Moving-Average".

We can use TimeSeries model to learn the relationship between the historical data to its future value.


Completely Unknown Function
But if we cannot even assume the model family, we can consider using "k nearest neighbor" approach to interpolate the output from its input.  We need to define the "distance function" between data points based on domain knowledge and also to figure out what the optimal value of k should be.  In many case, using a weighted average of the k-nearest neighbor is a good interpolation.

For example, in the relationship
UnitSold_2015 = G(Supply_2015, Demand_2015, Price_2015, CompetitorPrice_2015)
It is unclear what model to be used in representing UnitSold as a function of Supply, Demand, Price and CompetitorPrice.  So we go with a nearest neighbor approach.

Based on monthly sales of past 3 years, we can use "Euclidean distance" (we can also consider scaling the data to a comparable range by minus its mean and divide by its standard deviation) to find out the closest 5 neighbors, and then using the weighted average to predict the unit sold.

At this point, we have the following defined
Our goal is to figure out what the decision variables (which we have control) should be set such that the objective function is optimized (maximized or minimized). 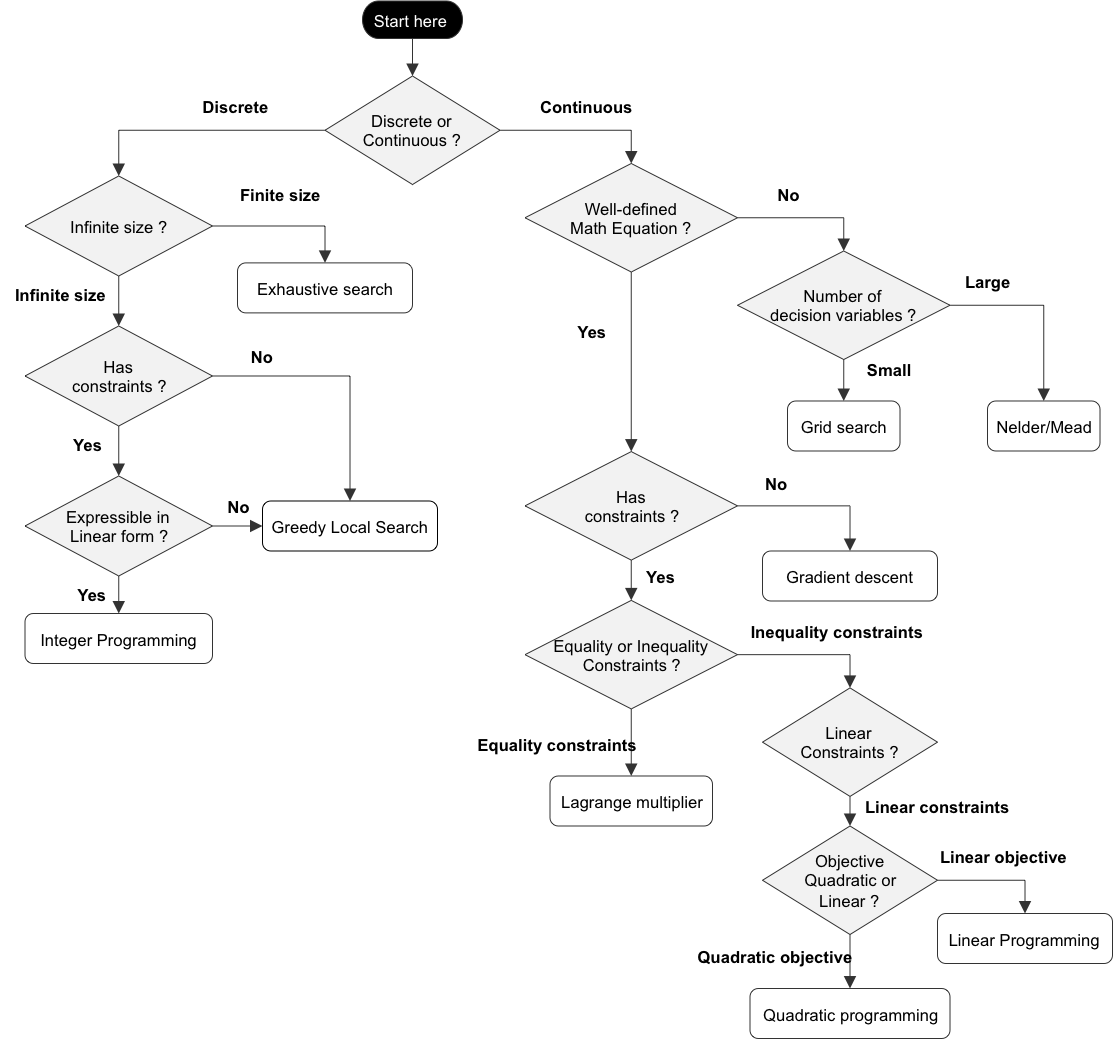 To summarize, we have following the process below
So far, our dependency graph is acyclic where our decision won't affect the underlying variables.  Although this is reasonably true if the enterprise is an insignificant small player in the market, it is no longer true if the enterprise is one of the few major players.  For example, their pricing strategy may causes other competitors to change their own pricing strategy as well.  And how the competitors would react is less predictable and historical data play a less important role here.  At some point, human judgement will get involved to fill the gaps.