First of all, lets define a "topic space" where both the content and user will be map to.  Having a "topic space" is a common approach in recommendation because it can reduce dimensionality and resulting in better system performance and improved generality.

The set of topics in topic space can be extracted algorithmically using Text Mining techniques such as LDA, but for simplicity here we use a manual approach to define the topic space (topics should be orthogonal to each other, as highly correlated topics can distort the measures).  Lets say we have the following topics defined ...

User as Vector of topic weights 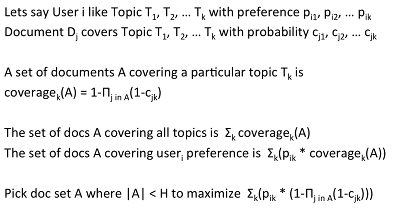 User is represented as a "query", and will be sent to the inverted index as a search request.  Relevant documents (based on cosine distance measures w.r.t. user) will be return as candidate set D (e.g. top 200 relevant content).

To pick the optimal set of A out of D, we use a greedy approach as follows ...