Two approaches on Multi-tenancy in Cloud

My thoughts has changed that now I think both the Amazon approach (Hypervisor isolation) and Salesforce approach (DB isolation) are both valid but attract a different set of audiences.

First of all, increase efficiency through sharing is a fundamental value proposition underlying all cloud computing initiatives, there is no debate that ...
But at which layer should be facilitate that ? Hypervisor level or DB level.

Hypervisor is a very low-level layer of software that maps the physical machine to a virtualized machine on which a regular OS runs on. When the regular OS issue system calls to the VM, it is intercepted by the Hypervisor which maps to the underlying hardware. The hypervisor also provide some traditional OS functions such as process scheduling to determine which VM to run. Hypervisor can be considered to be a very lean OS that sits very close to the bare hardware.

Depends on the specific implementation, Hypervisor introduces an extra layer of indirection and hence incur a certain % of overhead. If we need a VM with capacity less than a physical machine, Hypervisor allows us to partition the hardware into finer granularity and hence improve the efficiency by having more tenants running on the same physical machine. For light-usage tenant, such increment in efficiency should offset the lost from the overhead.

Since Hypervisor focus on low-level system level primitives, it provides the cleanest separation and hence lessen security concerns. On the other hand, by intercepting at the lowest layer, Hypervisor retain the familar machine model that existing system/network admin are familiar with. Since Application is now completely agnostic to the presence of Hyervisor, this minimize the change required to move existing apps into the cloud and makes cloud adoption easier.

Of course, the downside is that virtualization introduce a certain % of overhead. And the tenant still need to pay for the smallest VM even none of its user is using it.

Here is another school of thought, if tenants are running the same kind of application, the only difference is the data each tenant store. Why can't we just introduce an extra attribute "tenantId" in every table and then append a "where tenantId = $thisTenantId" in every query ? In other words, add some hidden column and modify each submitted query.

In additional, the cloud provider usually need to re-architect the underlying data layer and move to a distributed and partitioned DB. Some of the more sophisticate providers also need to invest in developing intelligent data placement algorithm based on workload patterns.

In this approach, the degree of isolating is as good as the rewritten query. In my opinion, this doesn't seem to be hard, although it is less proven than the Hypervisor approach.

The advantage of DB level isolation is there is no VM overhead and there is no minimum charge to the tenant.

However, we should compare these 2 approach not just from a resource utilization / efficiency perspective, but also other perspectives as well, such as ...

Freedom of choice on technology stack

Hypervisor isolation gives it tenant maximum freedom of the underlying technology stack. Each tenant can choose the stack that fits best to its application's need and inhouse IT skills. The tenant can also free to move to latest technologies as they evolve.

This freedom of choice comes with a cost though. The tenant need to hire system administrators to configure and maintain the technology stack.

Of course, the advantage is that there is no administration needed in the technology stack.

Since it focus in the lowest layer of resource sharing, Hypervisor isolation provides no reuse at the app logic level. Tenants need to build their own technology stack from the ground up and write their own application logic.

I think each approach will attract a very different (and clearly disjoint) set of audiences.

Notice that DB-level isolation commoditize everything and make it very hard to create product feature differentiations. If I am a technology startup company trying to develop a killer product, then my core value is my domain expertise. In this case, I won't go with the DB-level isolation which impose too much constraints on me to distinguish my product from "anyone else". Hypervisor level isolation much better because I can outsource the infrastructure layer and focus in my core value.

On the other hand, if I am operating a business but not building a product, then I would like to outsource all supporting functions including my applications as well. In this case, I would pick the best app framework provided by the market leader and follow their best practices (also very willing to live by their constraints), the DB level isolation is more compelling in this case.
Posted by Ricky Ho at 11:23 AM 2 comments:

Receive the question of "how search works ?" couple times recently so try to document the whole process. This is intended to highlight the key concepts but not specific implementation details, which will be much more complicated and sophisticated than this one. 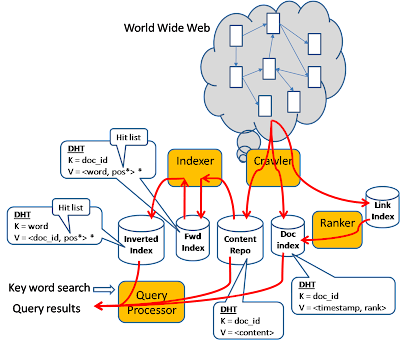 Notice that each element in the above diagram reflects a logical function unit but not its physical boundary. For example, the processing unit in each orange box is in fact executed across many machines in parallel. Similarly, each of the data store element is spread physically across many machines based on the key partitioning.

Here we use the "Vector Space Model" where each document is modeled as a multi-dimensional vector (each word represents a dimension). If we put all documents together, we form a matrix where the rows are documents and columns are words, and each cell contains the TF/IDF value of the word within the document. 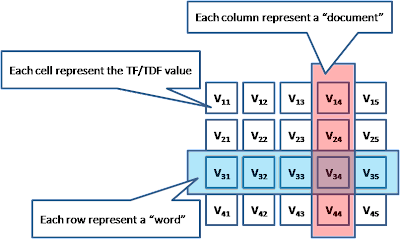 Crawler's job is to collect web pages on the internet, it is typically done by a farm of crawlers, who do the following

Start from a set of seed URLs, repeat following ...
The content repository can be any distributed file system, here lets say it is a DHT.

There are a number of considerations.

The Indexer's job is to build the inverted index for the query processor to serve the online search requests.

Ranker's job is to compute the rank of a document, based on how many in-links pointing to the document as well as the rank of the referrers (hence a recursive definition). Two popular ranking algorithms including the "Page Rank" and "HITs".
Page rank is a global rank mechanism. It is precomputed upfront and is independent of the query 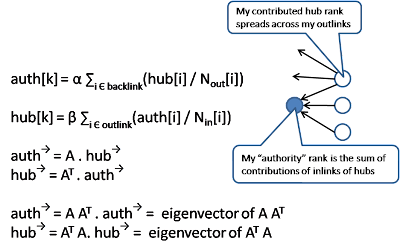 Notice that HITS doesn't pre-compute the hub and authority score. Instead it invoke a regular search engine (which only do TF/IDF matches but not ranking) to get a set of initial results (typically with a predefined fix size) and then expand this result set by tracing the outlinks into the expand result set. It also incorporate a fix size of inlinks (by sampling the inlinks into the initial result set) into the expanded result set. After this expansion, it runs an iterative algorithm to compute the authority ranks and hub ranks. And use the combination of these 2 ranks to calculate the ultimate rank of each page, usually pages with high hub rank will weight more than high authority rank.

Notice that the HITS algorithm is perform at query time and not pre-computed upfront. The advantage of HITS is that it is sensitive to the query (as compare to PageRank which is not). The disadvantage is that it perform ranking per query and hence expensive.

When user input a search query (containing multiple words), the query will be treated as a "query document". Relevancy is computed and combined with the rank of the document and return an ordered list of result.

There are many ways to compute the relevancy. We can consider only the documents that contains all the terms specified in the query. In this model, we search for each term (with the query) a list of document id and then do an intersection with them. If we order the document list by the document id, the intersection can be computed pretty efficiently.

Alternatively, we can return the union (instead of intersection) of all document and order them by a combination of the page rank TF/IDF score. Document that have more terms intersecting with the query will have a higher TF/IDF score.

In some cases, an automatic query result feedback loop can be used to improve the relevancy.

Fighting the spammer is a continuous battle in search engine. Because of the financial value of being shown up in the first page of search result. Many spammers try to manipulate their page. Earlier attempt is to modify a page to repeat the terms many many times (trying to increase the TF/IDF score). The evolution of Page rank has mitigate this to some degree because page rank in based on "out-of-page" information that the site owner is much harder to manipulate.

But people use Link-farms to game the page rank algorithms. The ideas is to trade links between different domains. There is active research in this area about how to catch these patterns and discount their ranks
Posted by Ricky Ho at 1:25 PM 4 comments: