Probabilistic model is a very popular approach of “model-based learning” based on Bayesian theory. Under this approach, all input attributes is binary (for now) and the output is categorical.

Here, we are given a set of data with structure [x1, x2 …, y] is presented. (in this case y is the output). The learning algorithm will learn (from the training set) how to predict the output y for future seen data

Lets say the possible value of output y is {class_1, class_2, class_3}. Given input [x1, x2, x3, x4], we need to compute the probability of each output class_j, and predict the one which has the highest value.

According to Bayes theorem, this value is equal to …

The dominator is the same for all class_j, so we can ignore it, so we just need to find

P(class_j) is easy to find, we just calculate

Now, lets look at the other term, P(observed_attributes | class_j), from Bayesian theory

In order to provide all the above terms for the prediction, we need to build the probability distribution model by observing the training data set.

Notice that finding the last term is difficult. Assume x1, x2 ... is binary, there can be 2 ** (m – 1) possible situations to watch. It is very likely that we haven’t seen enough situations in the training data, in this case this term for all class_j will be zero. So a common solution is to start with count = 1 for all possible combinations and increase the count when we see an occurrence in the training data. 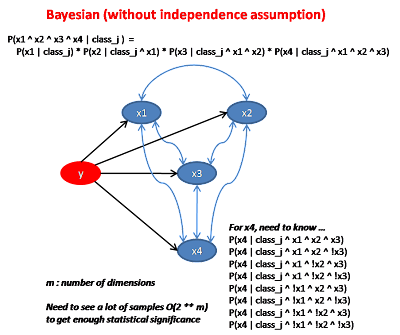 Bayesian Network base on the fact we know certain attributes are clearly independent. By applying this domain knowledge, we draw a dependency graph between attributes. The probability of occurrence of a particular node only depends on the occurrence of its parent nodes and nothing else. To be more precise, nodeA and nodeB (which is not related with a parent-child relationship) doesn't need to be completely independent, they just need to be independent given their parents.

we only need to find 2 ** p situations of the occurrence combination of the parent nodes where p is the number of parent nodes. 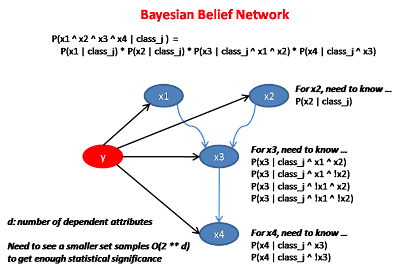 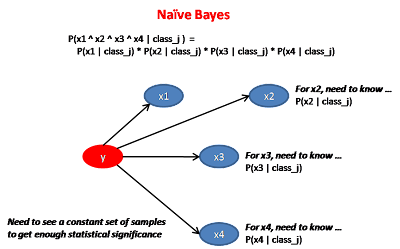 One way to deal with continuous variable is to discretetize it. In other words, we can partition x1 into buckets which has an associated range and assign x1 to the corresponding bucket if it falls into that range.

Lets walk through an application of the Naive Bayes approach. Here we want to classify a particular email to determine whether it is spam or not.

The possible value of output y is {spam, nonspam}

We can view mail as an array of words [w1, w2, w3, w4, w5]
We make some naive assumptions here
With these assumptions ...
What if we haven't seen the word "how" from the training data ? Then the probability will becomes zero. Here we adjust terms such that a reasonable probability is assigned to unseen words.

The learning process can also be done in parallel using a 2-rounds of Map/Reduce.

Alternatively, we can also update the counts incrementally as new mail arrives.
Posted by Ricky Ho at 8:30 AM

Can it be done using couch db view engine? Could you please give a small explanation about the way it could be done in couchdb map/reduce